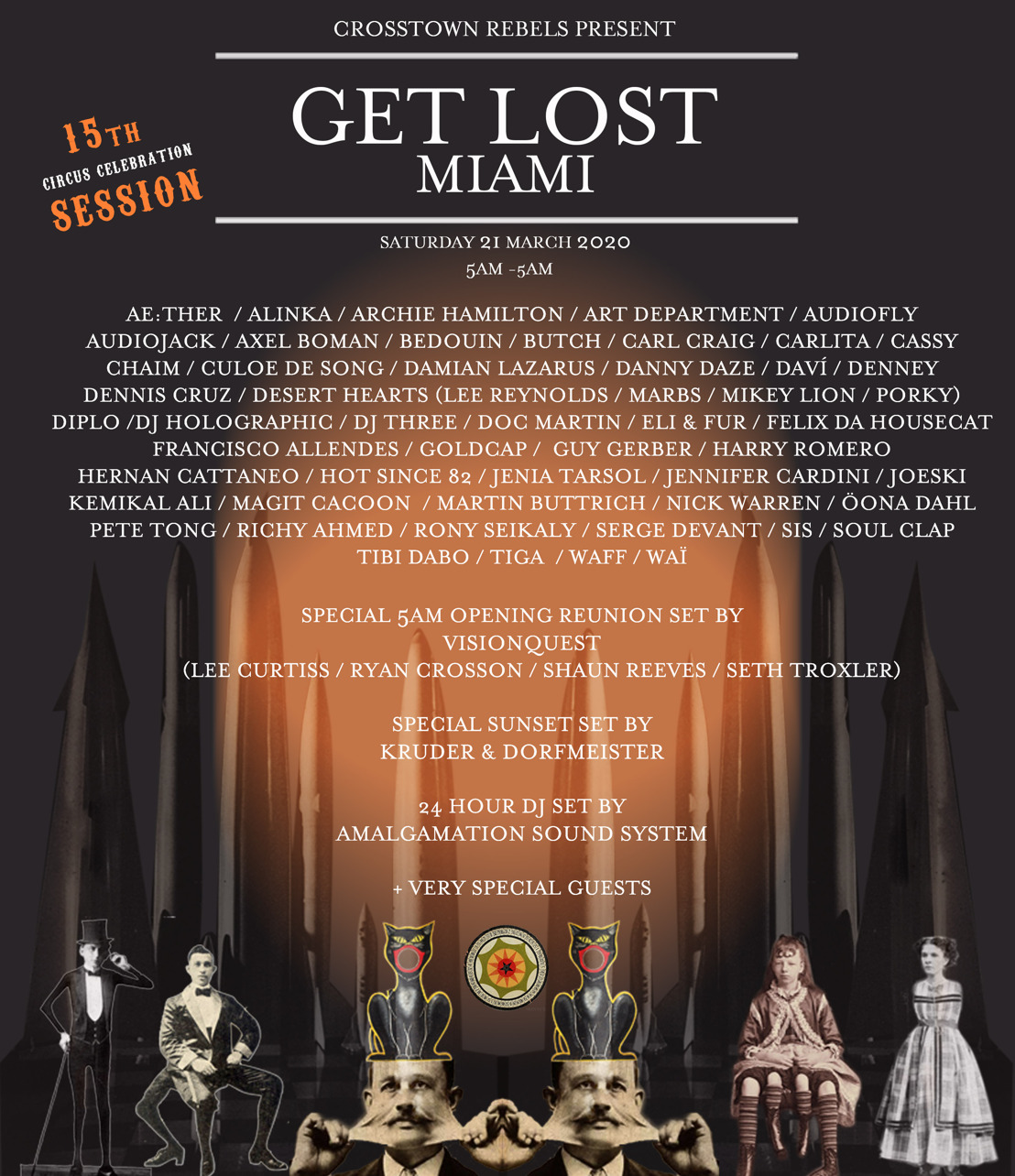 Very few pillars of clubland have stayed consistent through the times, with trends coming and going with the wind and their flag bearers reaching for what’s next. But through it all, Damian Lazarus and his Get Lost and Day Zero events have offered something palpable for only the world’s most hardcore party people. Today Damian has revealed a 70+ artist lineup for the fifteenth session milestone of Get Lost Miami on Saturday March 21 at a brand new location.

Much has happened since the first session of Get Lost began to reshape the context of March in Miami, but the ethos of the event has remained the same; offering a substitute to the often commercialized Miami Music Week programming. This is an event that becomes a marathon, a test of will, an after-hours party that has morphed into a festival experience, a journey deep into the minds of those brave enough to celebrate amongst the highest clergy of rave.

Get Lost’s fifteenth celebration welcomes over 70 mavericks from various dance music arenas to soundtrack the 24-hour bacchanale, which commences at 5am with the reunion of Visionquest. The Detroit collective of Seth Troxler. Ryan Crosson, Lee Curtiss, and Shaun Reeves will perform together as a quartet for the first time since 2013, kicking off a new era for these electronic visionaries. Carl Craig completes the Detroit contingent, while fellow American pioneers Joeski, Felix Da Housecat, Doc Martin, Danny Daze, and Soul Clap also join the bill.

Damian has made a habit of bringing together artists from scenes far and wide for the Get Lost marathon session. Diplo returns this year for another off-kilter, deep techno set, while Jennifer Cardini and Axel Boman will be bringing their eclectic stylings to Get Lost for the first time. Progressive magnates Hernan Cattaneo and Nick Warren also make their Get Lost debut.

Further expanding Get Lost’s sonic palate are Kruder & Dorfmeister, who’ve been tasked to handle the transition of day-into-night. Known for their psychedelic take on electronica and trip-hop, the Austrian duo are well equipped to provide the transcendent sunset experience that revelers crave. Meanwhile, the enigmatic Amalgamation Sound System are hosting the gathering’s fifth stage through the entire 24 hours.

Get Lost will continue to act as a showcase for both the acts that Damian is championing as of late and the fellow industry titans that have risen by his side. On full display will be the new-age tones of Tibi Tabo, Serge Devant, Ae:Ther, and Magit Cacoon, alongside a legendary cast of returning favorites like Hot Since 82, Art Department, Guy Gerber, DJ Three, Martin Buttrich, and Pete Tong.

Damian and his team dream up another immersive footprint ripe with hidden spaces, interactive art, roaming performers, and diverse stage environments. With a brand new space to play around with 2020’s theme will see attendees transported into a mystical world of Circus Celebration fit with acrobats, clowns and other entertainers who have simply lost their way.

Fifteen years since its formation Get Lost is as potent and impactful as ever, a beacon for the global underground community and a spiritual home for the nomadic party elite.